It’s already July. July! Summer is cruising right along, so I thought I’d get off my butt and write up a review for a book that I think makes for great summertime reading. I’m tempted to call the review section “Story time with Cogwheel,” for obvious reasons.

Shades of Milk and Honey, by Mary Robinette Kowal 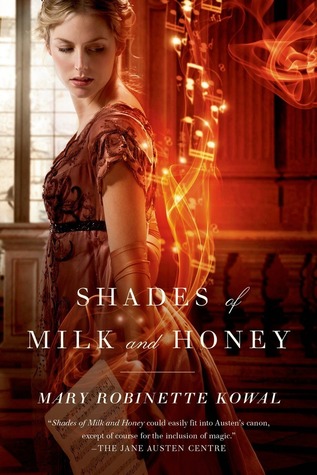 The first book in Mary Robinette Kowal’s (multiple Hugo Award winner/nominee, Nebula nominee, and all around pretty awesome person. She out-Rothfuss’d Pat Rothfuss once upon a time) Glamourist Histories quintet, Shades of Milk and Honey was a fun read. I’ll admit right up front, I don’t read many Regency/quasi-Regency/historical novels and I think the only work by Jane Austen I’ve read was Persuasion years ago, so Shades felt fresh to me. I’ve read reviews of people who were disappointed because it wasn’t “Austen” or “Austen-enough.” Well, it’s not Austen. It’s Kowal. It’s an alternate history Regency period but with magic (glamour)! I enjoyed it, but if you’re a die-hard Austen fan that wants something that is/feels Austen then this may or may not work for you.

I enjoyed this book a lot more than I thought I would. Again, don’t read much in this particular subgenre. The characters were engaging, though there’s room/need for further development, but since this was the first of five books I think the amount we got to know about each character was enough. The setting and magic element is what really sold me on this and kept me reading. Kowal defines glamour a bit more in the glossary as “[magic that allows people] to create illusions of light, scent, and sound. Glamour requires physical energy much in the same way running up a hill does.” I loved the subtle way glamour is woven into this alternate Regency world in a manner that’s noticeable yet reads as if it’s natural.

That’s not to say the plot is bad—it isn’t—but it is a bit slow to get going and the book reads easily. Again, not a bad thing, but if you’re looking for a book full of purple prose requiring you to reread a sentence over and over to glean every last ounce of meaning from it, then you should look for something else to put on the summer reading list. Shades is mostly about getting to know the characters, their world, and setting the stage for the big conflict at the end. For me, it worked. Even though as I was reading past the halfway mark and thought, “hmm, still not sure what the conflict is going to be/how it affects Jane,” I didn’t care because I was enjoying the journey.

This is the starting tale for Jane Ellsworth, plain in features and at 28 years old, resigned to being a spinster. Jane is skilled at working with glamour, and ultimately it’s her use of the magic that saves the day.

The sibling rivalry between Jane and her younger, prettier, charming sister Melody, sets up the characters and feeds the plot. Melody is well written as the annoying, spoiled, selfish brat that she’s capable of being, with a few dashes of redeeming self-awareness. She’s dramatic, but not unrealistically so. Readers can probably relate to Jane in some way because they either have a sibling or know someone who shares Melody’s flair for theatrics.

The supporting cast is interesting, and I liked them more once I got them sorted out by name. There are a few spots of dialogue that were hard to follow because multiple female Ellsworths were present, and both Jane and Melody are referred to as “Miss Ellsworth.”

Didn’t get a great feel for Mr. Vincent in this book aside from him being the brooding artist. I liked that he wasn’t too emo, but rather was absorbed in his art. It had a bit of snobby, misanthropic feel, but that was tempered by his interactions with Jane. On the one hand, I’d have liked to see their romance fleshed out more, but on the other, it’s more fitting at how it went in the book. Scenes of them courting or walking along a moor don’t fit his character at this point in the overall story. Maybe he gets more personality later on, I don’t know, but he was weird and artsy enough for me to be content with the ending.

And Jane. She’s unlike many of the heroines in the books I read because in some ways she’s not a “strong” character. She physically a bit weak, and though there are times I reallyreallyreally wanted her to hit someone, her character wouldn’t do that. I’m a barbarian. It’s not in Jane’s nature (thus far anyway), she’s too well-mannered, and that can be frustrating. But it fits her. She’s the epitome of “gentlewoman.” She relies on her wit (and some glamour) to enable her to save the people she cares about.

I thought I was going to be irritated and eye-rolling at how kind Jane is, but it was endearing. Her struggles against personal wants while trying to keep the peace felt real. She’s resigned to her fate to never find love, and the inner struggles she has between her own jealousies and wanting good things for her family gave her relatable depth.

The only time where Jane came off as utterly clueless and unrealistic was when she couldn’t begin to guess at who the man was behind Melody’s secret love. I mean, OMG, there’s only three men around their age mentioned in all of the book and one of them keeps hanging around at the house, and is already acting shady. Really, Jane? At 28 I’d think she’s been around the social scene long enough to see her fair share of scandals and love triangles. It’s shown earlier in the book that gossip keeps the social circle afloat, and Mrs. Ellsworth thrives on the stuff. Even if Jane had merely entertained the thought and dismissed it for whatever reasons, anything would’ve been better than her “oh dear, who could it be?”

Aside from that one bit of shaking-my-head-at-you, I liked Jane’s character and look forward to reading more of her adventures in Glamour and Glass. Have a safe 4th of July my fellow Americans, and happy Canada Day to the Canucks.