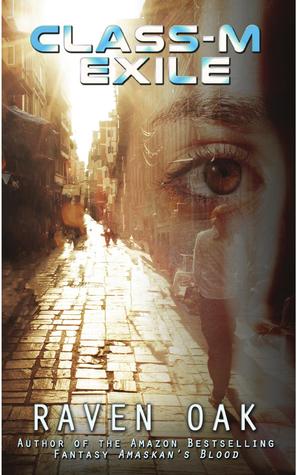 Went to my first book launch party last Friday. Not my book’s launch. I mentioned hearing Raven Oak read a passage from her recently released novella, Class-M Exile, last month at the Cascade Writers info session. Raven’s novella is “officially” launched (it was a sneak peek at the CW event), and I attended a launch party at the University Bookstore in Bellevue.

A small gathering, maybe a dozen or so in attendance. Not bad for 6:30pm on a Friday. Apparently some people complained about the venue being in Bellevue? Pfff. Parked in two seconds with plenty of space around and didn’t need to pay. Seattle’s hard-pressed to equal that in most places.

I’ve never been to that U Bookstore location before, and it was nice inside—café, UW themed stuff, large art supply selection, nice space by a fireplace (not that we needed it in June) for the reading/signing, and of course, a good selection of books. Considering that the floor space pales in comparison to a giant like B&N, I was pleasantly surprised by how many science fiction and fantasy books the U Bookstore had. Also had a long signing table with plenty of space, and a mix of folding plastic chairs and the more permanent comfy ones.

The U Bookstore staff were good hosts, and it was a nice gathering with wine and cheese. I liked how small it was because it was more intimate, not loud, not much in the way of a line, and conversations flowed more easily.

I’ve mentioned before that Raven’s reading with the southern accent is great. I’ll be hearing her voice when I read it. This is good, because otherwise I’m not sure how well the writing would come across for me, as it’s written to reflect the accent. Ex. “Hell, you could even buy yerself a gen-u-ine religion if you were so inclined.”

Aside from the usual reading and signing, Raven also had a short trivia game for us. She spent 20+ years in Texas before coming to the Pac Northwest, so we had fun playing a game of guessing headlines: Texas or The Onion. The number of times you wished the headline was from the Onion…

For swag, Raven had these cute stickers that are a nod to a line in the book. If you’re looking for fun ideas for a book launch or promotions, these were a nice alternative to bookplates. Cat tail not included.

Had a chance to chat with her while she signed my book, and spelled my name right! This sounds like a no-brainer, but the number of times someone has asked how to spell my name and still spells it incorrectly…*facepalm. Same thing where I point out how to spell it, or have it written/typed down in view. I hear people with unconventional spellings or ethnic spellings complain and I’m like, dude, people can’t spell my name right—y’all don’t have a chance. However, I do think there are instances where people consciously take better care if they see a name that they’re not familiar with. I need to start saying, “Jaime, like Jaime Lannister.” That presumes the person in question has read the book as opposed to only watching the show, but I’ll try it.

Also chatted with Raven about some upcoming cons/events and the dilemma of selecting which stories to submit to writers’ workshops. More on that in future posts once I see the results of how it all worked out, but the gist of it was that it’s a tricky line between wanting to represent yourself well but also submit the piece that needs more work since you’re paying for a critique. Constructive criticism is a lot more useful than the ego-boosting of a line of comments just saying they liked it. We’ll see. I have two separate pieces with one going to a CW workshop in July and the other to Sasquan in August.

Closing thoughts on book launches: having snacks is nice. The trivia game was fun, but I can see that being harder to engage in if there are a lot of people in attendance. Small gatherings are nice for more intimate chats. Swag is cool.